General Directorate approves telecommunication transmission service qualification
Under the backdrop of the triple play, which is about to roll out across the country, the SARFT issued a continuous message to IPTV following the 2010 Document No. 344 and the No. 43 document in 2012, expressing the idea of â€‹â€‹broadcasting systems for IPTV supervision in the future.
At the end of 2014, the State Administration of Press, Publication, Film and Television officially approved the approval of China Telecom Corporation to increase the scope of transmission of IPTV transmission services (Xinguang Broadcasting Network No. [2014] No. 69). Prior to this, China Telecom had submitted the second phase of application for triple play. Pilot business license request. 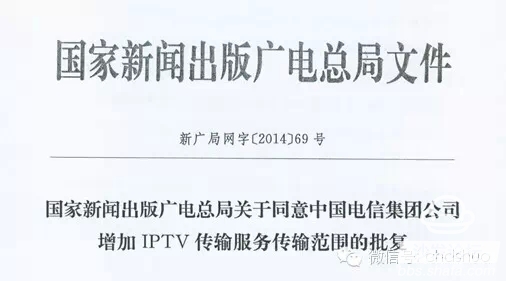 Interpretation: If it is not mistaken, after the expiry of an IPTV integrated broadcast control license of a broadcasting and TV institution that everyone is familiar with, the General Administration of Administration will not reissue it.

Interpretation: Where there are multiple IPTV integrated broadcast control platforms, telecommunications must choose a partner. As for who to choose, please see Article 1.

3) Guarantee the security and quality of broadcasts of programs, and not change, insert or intercept the program signals broadcast by IPTV integrated broadcasting and control platforms. Radio and television broadcasting organizations are responsible for EPG, authentication, billing, etc., and may adopt "double authentication, double Billing method;

Interpretation: Since it is impossible for authentication and billing to make it possible for telecommunication to be handed over, the two parties shall each establish a set. In addition, the dominance of the IPTV platform is clearly defined. Telecom only controls transmission and content cannot be touched.

4) Authorize the subsidiary company to launch IPTV transmission service, the telecommunications group company should hold 51%, and report to SARFT for approval;

5) Strengthen the management of authorized subsidiaries and standardize their business activities;

Interpretation: The son made a mistake to find dad, I first declared.

Many people think that the SARFT issued IPTV transmission qualifications to telecom operators is nonsense. People just do this, and why should you issue certificates to other people? However, the consideration of the General Administration of Management is that since you have to approve the two-way business qualification of radio and television, I have to wait and wait.

In addition, this document largely hits telecommunications, letting it follow the rules. What rules? The General Administration still has a postscript.

The General Administration once again issued a document for IPTV

In the context of triple-network integration, which is about to be promoted throughout the country (which means that IPTV is fully liberalized), the General Administration of China feels that the urgency of regulating IPTV must reaffirm the urgency of the previous Circular No. 344 and No. 43. Because of this, at the end of April, according to the spirit of the speech delivered by the Tian Bureau, the General Administration of Administration issued a notice on the issues related to the construction and management of the IPTV integrated broadcasting and control platform at the current stage (Xin Guang Guang Fa [2015] No. 97). 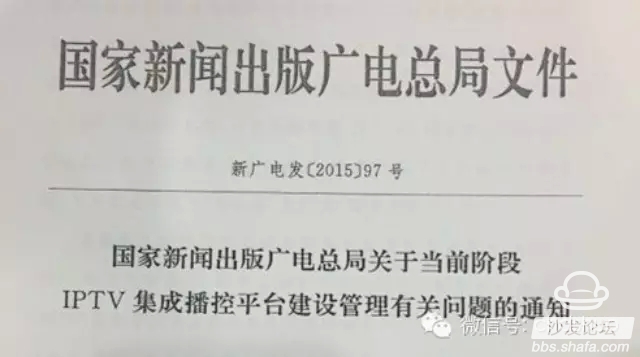 I. In-depth study and understanding of the State Council's three-network integration program and the related policy requirements of the General Administration of Customs, and accelerating the completion of the nationwide unified IPTV integration and broadcast control platform system.

Interpretation: Reiterating 344 and 43 articles, IPTV must clarify the guiding principles of broadcasting and television organizations, and the broadcasting and TV organizations must clearly define the â€œtotal-sub-divisionâ€ platform rules. Here again, it is clearly stated that "The CCTV shall organize the development and provision of technical solutions and system software for the IPTV Integrated Broadcasting and Control Platform and Sub-platform." Even the name of love is not mentioned, and the status of another broadcasting and TV institution is worrying.

Second, CCTV and provincial TV stations must strengthen cooperation and clear division of labor, and complete the construction and docking of the IPTV integrated broadcast control platform as soon as possible.

Interpretation: The overall platform for IPTV integrated broadcast control is built and operated by CCTV. CCTV and all provincial TV stations jointly build and operate IPTV integrated broadcast control subplatforms. Central and local provincial and provincial governments have made clear the distribution of cakes. All localities that do not meet this requirement must be rectified. It is estimated that an identity cannot survive.

Third, based on the standardization of the IPTV Integrated Broadcasting and Control Platform, we will accelerate the connection with the IPTV transmission system as required.

Interpretation 1: The license management system, the IPTV integrated broadcast and control platform and sub-platform, the national content service platform, the provincial-level content service platform, and the IPTV transmission service enterprise all have to hold certificates to formally conduct business. There is no need for information networks to disseminate audiovisual program licenses, which can be given statutory rights.

The document also pointed out that for those who do not meet the docking requirements of the CCTV's total broadcast control platform, they will not be allowed to provide program signals. The General Directorate said so, and in some places you can figure it out. By the way, this one is to open the way for Yueme?

Interpretation 2: Telecom operators can only do transmissions. They cannot add content without permission. All content must go through broadcast control platforms. In the past, the programs introduced by telecommunications itself, and even some value-added services, did not meet the requirements and they had to be revisited. As for other people's telecommunications, they will not hear this.

Fourth, implement the principle of territorial management and accelerate the construction of the IPTV supervision system.

Interpretation: The territorial supervision and broadcasting are responsible. Since all areas of IPTV are doing their work, they must implement "alarming" just like radio and television. Radio and TV administrations everywhere must take responsibility for supervision. They can't just think about making money, but they have to go out and have an accident, but they have to find you.

In fact, this article 97 for IPTV, there is not much new ideas. If Article 344 and No. 43 were strictly enforced, it would be arguable that there would be nothing in No. 97.

So since there is this 97 number, what does that mean? It shows that IPTV did not comply with the requirements of 344 and 43 before, especially last year's Wyatt Mee event, which made the radio and TV industry counter-increase, and the nationwide promotion of triple play was imminent, and the General Administration could not stand it. Come out to play the board, the following will not be to find a few places to teach the tree tree typical, right?

In addition, the 97th article only mentioned the role of CCTV as the IPTV broadcast control platform. There was no mention of BesTV and the joint venture between BesTV and CCTV. Although the latter, as the role of IPTV content service platform, does not mention the past, it always feels strange.

If we take into account that our CCTV has just taken office as the new director, or is it headed by the Directorate General, is it even more surprising? I hope much more!

This content is copyrighted exclusively by SofaNet. Welcome manufacturers to further exchanges and cooperation with us to create more in-depth product reports.

According to the different need, there are below several wall mount cabinets:

* the inside width fits for 19" networking equipment

* lower cost than normal one