In 2015, China's economic and social development began to fully enter an accelerated transition period, and the entire Chinese household appliance industry has also reached a time when transformation is imperative. In the new normal economic situation, Chinese and foreign home appliance brands are looking for new core competitiveness by shifting to the high-end in the value chain. High-quality TV products such as large-size, 4K ultra-high-definition and OLED have become the focus of market competition. Among them, in recent years, with the gradual maturity of OLED display technology and the continuous improvement of the yield rate, the scale of the OLED TV panel market has exploded in 2015, which will directly affect the future production and sales of OLED TVs. 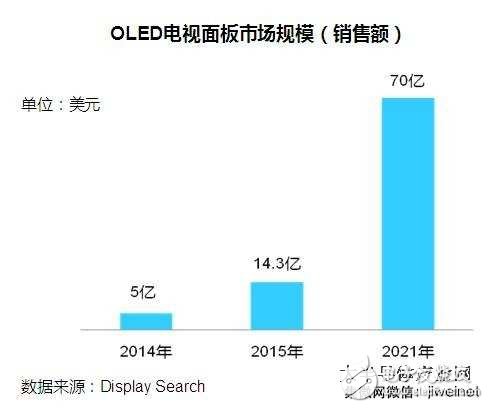 Data shows that before 2013, OLED technology has been applied to small display devices, such as mobile phones, MP3/MP4 and so on. Among them, mobile phones are the largest market for OLED applications, and 96.7% of the products used in the OLED panel market are mobile phones. Since 2014, OLED technology has been continuously improved, and the yield of products has been comprehensively improved. Large-size OLED panels have begun to enter the market. In 2014, the global market for OLED TVs was 77,000 units, with a total market value of 284 million US dollars, which is more than 5.5 times higher than the 2013 US$43 million. It is estimated that the OLED TV panel market will grow 10 times in 2015, reaching 770,000 units; in 2021, it will reach 16.5 million units, and the market size will reach 7 billion US dollars. With the rise of OLED TVs, the total market of OLED TV panels in 2015 will reach 1.43 billion US dollars, and OLED panel advocate LGDisplay realized the mass production of OLED TV panels as early as 2014, marking the official entry of OLED into the big screen era.

According to the survey data of the China Electronics Chamber of Commerce Consumer Electronics Survey Office, the price of OLED TV products is loose. At the beginning of 2014, 55-inch OLED TVs reached 60,000 yuan. By the second half of the year, the price of 55-inch OLED TVs has fallen below 30,000 yuan. With the gradual decline of OLED panel costs, mass production of domestic and foreign brands of OLED products has been realized. In 2015, China's old-fashioned color TV company Skyworth announced mass production of OLED TV. It is understood that the price of new OLED TV launched by Skyworth this year has fallen below 20,000 yuan, of which 4KOLED55 inch S9300 is priced at 14,999 yuan, 2KOLED55 inch S9000 is only priced at 11999 yuan, OLED TV will officially enter the ordinary people's home, let more people enjoy The quality of life brought about by TV technology innovation.

In 2015, it was hailed as the â€œfirst year of promotion of OLED TVâ€. OLED panel companies and complete machine manufacturers are ready to go, and increase efforts to promote OLED TVs, such as Skyworth, LG, LGDisplay and other upstream and complete machine manufacturing enterprises. As a domestic old-fashioned color TV manufacturer, Skyworth has been at the forefront of the industry. In 2015, it launched the new 4KOLED S9300, demonstrating leading technology and product design to global consumers, and making China's color TV brands occupy an important place on the world stage.

OLED TV technology has shown signs of rapid development in the second half of this year. Today, in the rapid update of the TV industry, OLED display technology has been a conceptual hype for a long time, and there is no practical application. I believe that in the context of market integration of color TV enterprises and technological innovation, OLED technology represents the future development direction. Some brand companies are needed to be pathfinders, such as Skyworth and LG, which have already released OLED strategies. Of course, the accumulation of OLED technology from the accumulation to the outbreak needs to include the popularization of OLED knowledge and the application of technology. At present, the promotion of national policies and the promotion of brand enterprises will further promote the rapid development of the OLED market.