In addition to the PS vr listed, these days the vr circle should focus on the news of "50% of storm mirror cuts".

The VR boom has transited, and the slow pace is an emergency need, but it won't be killed by a stick.

Last month, the layoffs incident pushed the storm mirror to the forefront. The scale of 500 people was reduced to 300 people, and the star company with a valuation of 1.34 billion yuan once again became the focus, questioning and screaming. Earlier this month, Huang Xiaojie, CEO of Storm Mirror, responded to layoffs and company adjustments, but many details were only available. For the feelings of â€œgreat operating pressureâ€ and â€œcold capital is very coldâ€, Huang Xiaojie and Storm Mirror seem to have more words to say.

Run a question first, remember the smart hardware industry two years ago? Cups, toothbrushes, gloves, watches, bracelets, clothes, pants... as long as it can carry Bluetooth and Wifi modules, connect with smartphones, bind an app, add "smart" words, then various smart hardware The company came into being, and it seems that everything around it is starting to be intelligent.

But then? According to statistics, since the rise of the smart hardware wave in 2013, less than 10% of the companies that have survived. Now this nightmare begins to fall on vr, and the storm mirror that is advertised as "domestic vr pioneer" seems to be recruited. Although Storm Mirror is said to be a normal business adjustment, "50% layoffs" still appears to be somewhat abnormal. 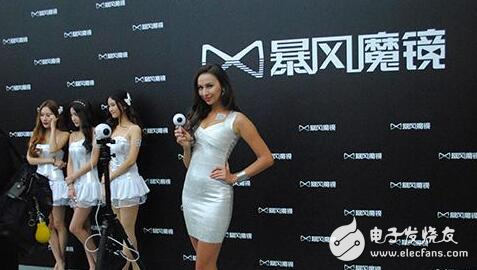 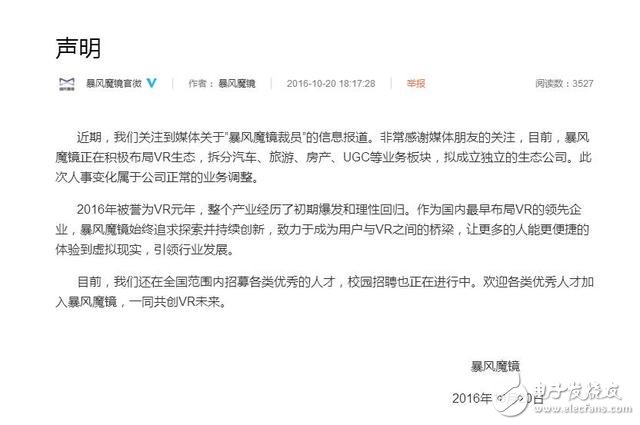 In the face of the layoffs of the storm video, some people shouted the "vr winter" argument, but instead of saying this, it is better to say that the storm mirror fell on the radical road.

We have restored the history of the Storm Mirror into vr for more than two years. It is not an exaggeration to describe it with the word "radical".

In September 2014, the first generation of products went live;

In December 2014, the second generation of products went live;

In June 2015, the third generation of products went online;

In November 2015, the fourth generation of products went online;

In June 2016, the fifth generation of products went live;

Since September 2014, Storm Mirror has been steadily releasing the latest products in accordance with the half-year cycle, and each generation of products is divided into customized series, standard version and other series, in addition to special versions such as small M and small D.

There are many product update cycles and many product versions. This is where the Storm Mirror has been questioned. Of course, the reason for this rapid cycle of research and development, Storm Mirror also has its own difficulties, or is the impulse.

If you follow the rhythm of Oculus, HTC, PS vr, Gear vr step by step, it may not be possible to develop the product for several years. Storm Mirror is not a giant company like the previous ones. Although it is backed by A-share listed companies such as Storm Video, after all, it has limited capital and R&D strength. It can only develop a product that is mature and basically meets product performance. , through iterative upgrades.

Although the speed of such product release makes the Storm Mirror look familiar at once, it does not mean that it is a big step. From the first generation to the fifth generation, the Storm Mirror is still just a mobile phone vr box, a plastic version of the Cardboard, although the black technology label such as "gesture recognition", but did not get much support.

Generally speaking, many so-called â€œpioneer companiesâ€ in the industry hope that they can become the platform of this industry. Just like Oculus, HTC, Sony and Samsung in the vr field, they are building their own ecological hopes. Looking at the country, although there may not be a clear indication, the storm mirror invisibly shapes itself into a platform image.

In January 2015, Feng Ying video CEO Feng Xin (microblogging) said that it would build a â€œvr ideal countryâ€ and launched a recruitment plan for 210 partners and 10 vr partners.

In order to achieve this "three 10 million" goal, Storm Mirror has also begun a radical and crazy expansion, taking only the dynamics of the past year as an example:

In January 2016, Storm Mirror will cooperate with ARM in the depth of technology and content in the vr field. The cooperation between the two parties will involve rendering optimization, delay and other core parts of the vr domain.

In January, Korean sports and entertainment company ROAD FC announced that Storm Mirror has become its vr strategic partner, and both parties will carry out all-round cooperation in the vr field to achieve a win-win situation.

In April, World Cruises announced that it has become a vr strategic partner with Storm Mirror, creating the first vr cruise experience zone in China.

In May, Hualu Baina and Storm Mirror will reach a strategic partnership in the vr field on the panoramic live broadcast/recording of a series of performing arts, variety, sports and film and television drama projects.

In September, IT education brand I won the workplace and storm mirror to reach a strategic cooperation, a total of vr education platform.

A series of strategic cooperation, strategic partners, a vr ecology centered on Storm Mirror seems to have taken shape.

But vr has just started in China, many companies are holding a "try it out" mentality to layout vr, not as their core business, and even some companies are packaging a vr concept, in order to obtain financing, Pull up the stock price.

Facebook's ecology is strong enough, but Zuckerberg also stated: "The establishment of a complete vr ecosystem will take at least 10 years and will not enter the mass stage in a short period of time."

In fact, as a start-up startup, it is very difficult to establish a real so-called ecology in the disadvantages of technology, capital and channels. This is very realistic.

Storm Mirror began to carry out ecological layout too early, and which field wants to cut in. The final result is that the announcement is finished, it is finished, and there is not much physical movement, and it cannot rely on commercialization to transfuse itself. Coupled with the storm mirror has not been financing for a long time, project stranding, business adjustment, layoffs should be a natural thing.

The progress of Storm Core's core business in this year

According to Huang Xiaojie, after a round of adjustment, R & D personnel accounted for 60% of the team, that is, about 180 people. The core technology leader, a veteran from the mobile phone circle, is mainly focused on "optical structure design, immersion improvement and other aspects to make breakthroughs." At the core business level, CEO Huang Xiaojie said that Stormwind Mirror is doing two things mainly this year:

1) Realization of hardware technology changes, including user scale, shipments, etc. have achieved rapid growth. The number of users has increased by 10 times, and monthly active users have increased from 100,000 at the beginning of the year to a million.

2) At the content level, there are 2,000 videos, of which hundreds are VR videos. These videos are obtained through cooperation, PGC (professional team production), self-made, copyright replacement, etc. In addition, a number of IP resources were purchased to reserve the game content to be launched next year.

Mention the statement in the open letter that "the capital is cold in winter." Huang Xiaojie said that â€œcoldâ€ mainly means that the secondary market is getting colder, and it is obvious that it can be seen from the stock market. The secondary market has also affected the response of the primary market to a certain extent.

At the beginning of the year, the capital market was particularly enthusiastic, adopting expansion and multi-business line play. "Now the capital market is shrinking, we will adjust the pace, reserve grain, focus on the core business." Huang Xiaojie once again added considerations for layoffs and splits.

As for "the operating pressure is very high", it mainly means that the labor cost is very high. In addition, because the company's business is not focused enough, the core business and platform-level business practices are not the same, and the operational strategies and methods are more difficult.

The impact of the landing of Google Daydream

Of course, the wind mirror is just a cheap mobile phone vr box, the product experience is not good, and there are not many developers around it. The business adjustment of the Storm Mirror family cannot represent the development direction of the vr industry. If you really want to see the future direction of vr, perhaps the three major vr products (Oculus, HTC Vive, PS vr) and Google's Daydream listed this year are the focus of our attention.

Huang Xiaojie revealed that VR glasses customized for P9 mobile phones will be officially launched in the near future. In April of this year, Huawei mentioned VR glasses and related strategies, but now does not see the entity of its VR glasses. In addition, according to the wisdom of things, Huawei's VR R & D team has been paved to 500 people, the technical level is more independent research and development. The cooperation model with Storm Mirror may be biased towards content and operations.