In terms of LEDs, Nichia has vertically integrated the entire industrial chain. And only the LED light source device is sold externally, and the LED chip is not sold. With its patent advantages, Nichia continues to grow and develop in the LED field, occupying a very large market share in the global high-end LED display and LED backlight field.

At present, the company's LED packaging products are mainly Lamp and SMD, COB also has a small amount of production, the total number of product types and models of the three package types is 165. Among them, the total number of white light and warm white models is 112, accounting for 68%. LED application products mainly include lighting, display, automotive, LCD backlight and UV LED. Among them, the display and backlight business is the main source of income of the Optical Semiconductor Division, and the lighting aspect has yet to be developed. 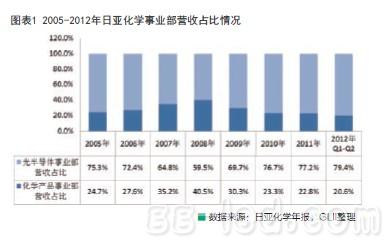 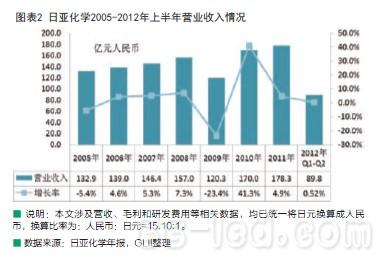 As can be seen from Chart 2, in addition to the impact of the 2009 financial crisis and the impact of the LED industry boom in 2010, Nichia's overall operating income is growing steadily. Among them, compared with 2010, Nichia's revenue growth in 2011 and the first half of 2012 slowed down significantly, mainly due to weak market demand and reduced shipments, as well as fierce competition leading to a decline in sales prices.

In terms of regional revenue distribution, as shown in Chart 3 below, the company's revenue is mainly from Japan and other parts of Asia. Before 2009, Nichia's revenue share in Japan continued to remain above 70%. However, after the financial crisis, the proportion of revenue in Japan continued to decline, and the region in Asia (excluding Japan) continued to increase accordingly. In the past two years, the company's revenue share in Japan has fallen to 51%, while revenue in other parts of Asia has increased to more than 30%. Among them, in the first half of 2011 and the first half of 2012, Japanâ€™s revenue in China accounted for 19.3% and 14.1% respectively. In the past, Chinaâ€™s revenue accounted for less than 10%. 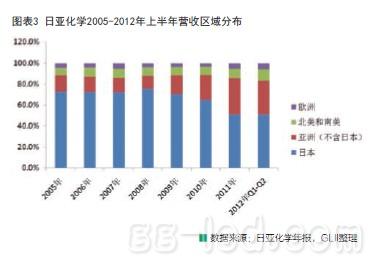 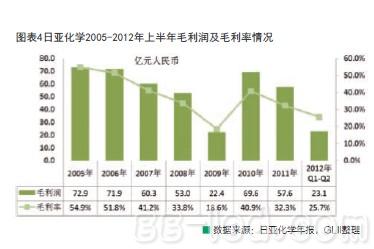 As can be seen from Chart 5, Nichia's R&D expenses are very high in the past years. During the period of 2005-2011, the company's R&D expenses exceeded RMB 1 billion per year, and R&D expenses accounted for more than 8% of total revenue.

The strong investment in research and development has enabled Nichia to make breakthroughs in technology. As can be seen from Table 4 below, as of the end of 2012, Nichia's chemical semiconductor technology patents, the company's patents in 33 countries and regions around the world reached 3008, involving chips, packaging and phosphors and other sub-sectors. Among them, 2,357, 641, and 10 invention patents, design patents, and utility patents, respectively, the largest number of invention patents, accounting for 78%. 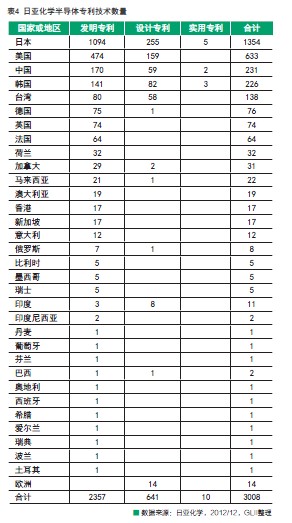 Fujitsu Takuya said that Nichia hopes that by 2015 China's market revenue will account for 50% of the company's total LED business revenue. In 2011 and the first half of 2012, Nichia Chemical's revenue in China accounted for 19.3% and 14.1%, respectively. Compared with the 50% revenue share, there is still much room for improvement.

Based on this, Nichia has stepped up its Chinese layout. In March 2012, Nichia Chemical established a branch office in Guangzhou. So far, the company has established a vertical sales network in Beijing, Shanghai, Guangzhou and Hong Kong. Nichia said that in the future, the company plans to set up a branch in the inland region of China to achieve a sales network system covering all of China. In terms of China's production base, Nichia Chemical's Shanghai Minjiang plant has started construction in 2012 and is expected to be mass-produced this year.

Easy installation. Paste adhesive hook (included) on the window, then hang it by hanging chain (included).

Safety, long lifetime & easy operation. Use UL listed LED neon strip & low voltage DC12V adapter (included), a safe guaranty. No battery & remote controller included which will be out of function when cell battery of remote controller is empty (it`s difficult for a common user to replace the cell battery) or keyboard lost.

A unique sign. It`s a handmade crafts by artist. Each Open Neon Light mounted on acrylic board by hands.