With the advent of the energy crisis, efficient lighting technology has received widespread attention. Light-emitting diode LED (Light EmitTIng Ddiode) is a device that converts electrical energy into light energy by using a semiconductor PN junction or the like. It has many advantages in high efficiency, low power consumption, low voltage driving, long service life and the like. Get popular applications, such as various consumer electronics products - mobile phones, PDAs, LCD TV backlights and so on. High-brightness LEDs are an ideal alternative to traditional incandescent lamps because they have much higher lifetimes and efficiencies than the latter, and unlike compact fluorescent bulbs, these LEDs can operate at low temperatures. In order to improve the performance and application range of LED lighting circuits, this paper will introduce a cost-effective high-brightness white LED (HBLED) dimming method.

For HBLD, the on-voltage is as high as 3 to 5 V and the operating current is 0.15 to 3 A under high illumination conditions. The brightness of the LED is roughly proportional to the magnitude of the forward current flowing through the LED, so one of the key technologies for LED applications is to provide a power supply or drive circuit that is compatible with its characteristics. High brightness LEDs have two basic dimming methods. The first is a PWM (Pulse Width Modulation) dimming method that turns the LEDs on and off at different frequencies from 0% to 100% at certain frequencies greater than 200 Hz. During the on-time, the LED is fully current-operated, and no current flows through the LED during the turn-off period to ensure color consistency. The second method is to control the amount of current flowing through the LED string, which may cause the voltage of the LED string to drop and cause a slight chromatic aberration. However, if you observe an incandescent lamp that works with the dimmer turned on, you will see noticeable color changes.

High-brightness white light diodes are generally driven by a constant current source. Because as the LED gets hotter, its voltage drop will decrease, and if the LED string is powered by a constant voltage source, the power supply will continue to supply too much current, causing the output voltage to increase until the power supply reaches the current limit or LED. Invalid. Pulse width modulation mode is to switch the LED with higher frequency. The switching frequency is beyond the range that can be perceived by humans. It gives the illusion that the LED is always bright. Now the pulse width modulation method is widely used to adjust the brightness of the LED. In some applications, The dimming ratio can be up to 5 000:1. The commonly used LED drivers are Buck, Boost, and Buck-Boost. The LM3402 is a step-down regulator derived from a controllable current source. The input voltage range covers the entire automotive application. The built-in MOS transistor can drive up to 5 LEDs, which is cost-effective, and has a wide acceptance field and simple and practical lines. It is the leader among many LED driver ICs.

Since the luminous efficiency of a single HBLED cannot fully meet the brightness requirement, it is necessary to form an array with a plurality of LEDs, and one LM3402 performs constant current driving on a string of five high-brightness light emitting diodes (HBLE-Ds), and accepts one micro processing. The PWM pulse width adjustment control of the P89LPC932 enables stepless regulation. The current flowing through each HBLED is approximately 120-350 mA.

There are 3 buttons (off, brighten and dim buttons) and 4 normal LED indicators on the operator panel. Pressing the close button will extinguish the high-brightness LED string HBLEDs. Pressing this button again will return to the original brightness display state. If the power is turned off or restarted, it can return to the set brightness state; the brightness and dimming buttons are used for Change the brightness of the HBLEDs, corresponding to 4 indicators, each of which has a light and dark 2 level indication, which can indicate the 8th brightness.

The drive circuit is the core of the entire LED dimming circuit, and is mainly composed of a microprocessor P89LPC932 and LM2402 constant current regulator circuit. The LM3402 is a step-down regulator derived from a controllable current source that drives a series of high-power, high-brightness LED strings that accept input voltages in the range of *2V. When using the pin-compatible LM3402HV, the input voltage can be up to 75V. The output voltage of the converter is adjusted as needed to maintain a constant current level through the LED array. As long as the combined feedforward voltage of the HBLEDs does not exceed Vo(MAX), the circuit can maintain the regulated current in any number of LEDs. Figure 1 is a typical application circuit diagram of the LM3402, in which RSNS is the current setting resistor, the average current IF â‰ˆ 0.2 / RSNS, the value of RON is related to the number of LEDs in the LED string, and the value of 300+ can be 300KÎ© for more than 5 LEDs. Detection, when the constant current is nominally 250 mA (RSNS = 0.8 Î©), the current fluctuation is within Â±10 mA. 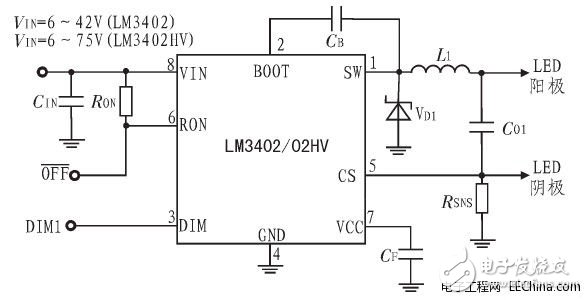 Figure 1: Schematic diagram of a typical application circuit for the LM3402

The logic of DIM1 is straightforward, so the LM3402 will output a steady current when the DIM1 port is high, and disable any current output when DIM1 is low. Therefore, the PWM signal is input to the DIM1 port of the LM340 2, and the LED array can be dimmed. The maximum logic low level of the PWM signal should be 0.8 V, and the minimum logic high level is 2.2 V. The DIM1 port is floated or connected to a logic high level. Once the input reaches 6 V, the LM3402 starts operating.

Ground the OFF port to place the LM3402 in a low power shutdown state (typically 90Î¼A). The port should remain open during normal operation.

The P89LPC932 is a low-power, single-chip microprocessor from Philips that operates at 3.3 V and operates at low power, making it suitable for many applications requiring high integration and low cost. Can meet a variety of performance requirements. The P89LPC932 uses a high-performance processor architecture that requires only 2 to 4 clock cycles of instruction execution and 6 times the standard 80C51 device. The P89LPC932 integrates many system-level features to greatly reduce component count, board area, and system cost. It has two internal timers that can be used as a PWM generator with 256 timer clock cycles. The electrical schematic diagram of the LED dimming circuit is shown in Figure 2. 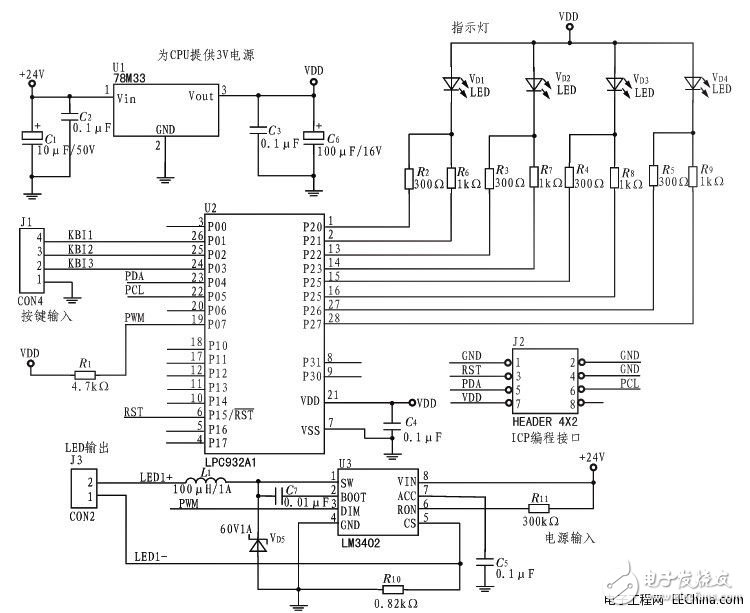 Main Band Switch characteristics as below:

- Including inhibit and parity signal to avoid error.