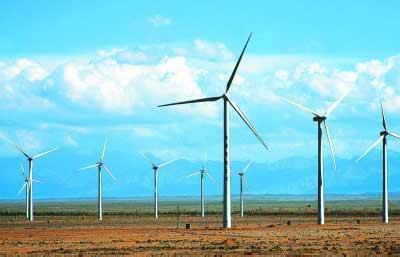 Guodian Beilun Power Plant in Ningbo is one of the largest thermal power plants in China. However, the reporter did not see heavy smoke and dust here. The factory area was clean and beautiful, with green eyes. Five sets of 600,000 kilowatts and two million kilowatt ultra-supercritical units are operating efficiently. Desulfurization and denitrification devices are fully equipped. It is no longer the old model of â€œlow-efficiency loss and serious emissionsâ€ in thermal power plants. At the same time that the dust emission of the whole plant is far below the national standard, Beilun Power Plant is the industry leader in profitability per unit capacity.

Since the â€œEleventh Five-Year Planâ€ period, Guodian Group has closed down 8.643 million kilowatts of small thermal power generators, focusing on the development of large-scale high-efficiency thermal power units and cogeneration units of 600,000 kilowatts or more, and the proportion of supercritical and ultra-supercritical units has reached 40.8%. Guodian Group's practice shows that thermal power does not necessarily mean pollution. As long as we vigorously promote structural adjustment, technological progress, and energy conservation and emission reduction, thermal power can also be clean and efficient.

Let us turn our attention to the surface of Jiangsu Rudong. Here is China's largest offshore intertidal wind farm built by China Longyuan Power, a subsidiary of Guodian Group. A white wind turbine stands in the wind and the blades turn as if they are in the wind. Dance from the middle.

Adhering to the optimization of the structure in the course of development and energetically developing new energy to lead the transformation of the company has become one of the unique development models of Guodian Group. Up to now, the proportion of the Group's high-efficiency thermal power units and clean renewable energy has reached 62.8%. The total installed capacity of wind power reached 15.48 million kilowatts, ranking first in the world. In 2012, wind power generated 22.3 billion kilowatt-hours of electricity, accounting for 22% of the national wind power generation. As of the end of June, the Group's hydropower installed capacity has reached 11.692 million kilowatts. In addition, Guodian Group built the first domestic trough solar thermal power generation project in Turpan, Xinjiang, put into operation 4 biomass power plants, and has the largest tidal power station in Asia (Jiangdian Chaoshan Power Station of Guodian) and the largest new power in the country. Energy Micro-grid Project (Guangdong Dongfushan Island Scenery Storage and Diesel Seawater Desalination Integrated System Project). At present, the Groupâ€™s installed capacity for clean renewable energy has reached 27.78 million kilowatts, which is 9.1 times the beginning of its establishment and accounts for 22.9% of the total installed capacity. The development of new energy has not only optimized the company's power supply structure, but also improved its profitability. From 2009 to 2012, the company's wind power, hydropower and other cumulative operating income was 54.6 billion yuan and total profit was 17 billion yuan, which accounted for 7.7% and 56.7% of the company's total operating income and total profit, respectively, which not only made up for huge losses in thermal power, but also became stable. The source of income and profits.

The optimization of energy structure has also effectively promoted energy conservation and emission reduction. During the â€œEleventh Five-Year Planâ€ period, when thermal power capacity and power generation volume increased by 200% and 143% respectively, the Group completed its energy saving and emission reduction targets one year ahead of schedule and reduced sulfur dioxide emissions by 48%. Since the â€œEleventh Five-Year Planâ€ period, the coal consumption for power supply has dropped from 361 g/kWh to 315.6 g/kWh, and the power plant electricity consumption rate has dropped from 6.36% to 4.9%, saving 36.5 million tons of standard coal.

New development ideas require new impetus. Guodian Group vigorously implemented innovation-driven innovation to foster new economic growth points for enterprises and enhance their development potential. The Group strives to build a technological R&D system that combines production, education and research. The open innovation system and unremitting efforts have enabled the Group to harvest a large number of innovations. Since the â€œEleventh Five-Year Planâ€ period, it has undertaken 29 state-level scientific research projects, formed more than 20 independent intellectual property rights core technologies, obtained 3 national second prizes for scientific and technological progress, and obtained 823 patents in total. In the field of energy conservation and environmental protection and new energy equipment manufacturing, the Group has a number of technologies that are at the advanced level in the world. The Taizhou million-kilowatt ultra-supercritical unit currently under construction uses secondary reheating technology for the first time in the country. It is the first domestic and largest thermal power technology innovation demonstration project with the best comprehensive parameters.

According to reports, Guodian Group plans that by 2015, the proportion of clean renewable energy installed capacity will reach 30%. In thermal power installations, 600,000 kilowatts and above units will account for 45%, and supercritical and ultra-supercritical units will account for more than 50%. By 2020, the installed capacity of clean renewable energy will exceed 40%, the new energy industry will form a scale, the energy structure will be fully optimized, and the energy conservation and emission reduction targets will reach the international advanced level.

Fused Biconic Taper (FBT) splitter, also be called fiber coupler, based on the traditional technology, it is to bundle together two or more optical fibers, and then pull the cone machine melt stretching, and real-time monitoring the change of the ratio, spectral ratio requirements after melt stretching, one side retain a single fiber (the rest of the cut) as input, the other end is a multi-channel output.

As one of the key components for GPON FTTx networks, optical splitters can be placed in the Central Office or in one of the distribution points (outdoor or indoor) because the FBT splitters are highly stable for multiport optical signal splitting with low insertion loss. FBT couplers are designed for power splitting and tapping in telecommunication equipment, CATV network, and test equipment