The insiders know that LED fluorescent lamps will become a new generation of energy-saving and environmentally-friendly lighting, but now the country produces at most hundreds of thousands of LED fluorescent lamps every year, and most of them are exported. There are very few domestic uses. In fact, the most important problem is the price problem. An ordinary energy-saving fluorescent tube is fixed for more than ten yuan, and one LED fluorescent tube has hundreds of pieces. Therefore, the current fluorescent tubes are mainly based on commercial lighting. Because commercial lighting will take into account energy conservation, environmental protection, image, government support and so on.

In fact, the main source of the above problems is still generated by the built-in power supply!

Here are some of the performance aspects of fluorescent tubes designed by professionals who have built-in power supplies and external power supplies:

The power of LED fluorescent lamps is divided into built-in and external. The so-called built-in means that the power supply can be placed inside the lamp. The biggest advantage of this built-in type is that it can be made to directly replace the existing fluorescent tube without any modification. So the built-in shapes are made into a strip shape so that they can be inserted into a semi-circular tube.

The following two types of built-in, non-isolated and isolated types are introduced.

(b) Non-isolated constant current power supply: Non-isolated means that there is a direct connection between the load terminal and the input terminal, so there is a danger of electric shock due to the touch load.

The most widely used is the non-isolated direct step-down power supply. That is, after the AC power is rectified, DC high voltage is obtained, and then the buck circuit and the constant current control are directly used. Its electrical schematic is shown below: 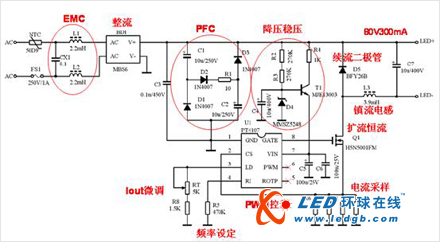 
The main technical features of this non-isolated power supply: wide voltage input range from 18V to 450V, constant current output; frequency jitter to reduce electromagnetic interference, random source to modulate the oscillation frequency, which can expand the audio energy spectrum, extended The energy spectrum can effectively reduce the in-band electromagnetic interference and reduce the difficulty of system-level design. It can be used for linear and PWM dimming to support hundreds of 0.06W LED driving applications. The operating frequency is 25KHz-300KHz, which can be set by external resistors.

The advantage of a non-isolated constant current source is that it is simple and has a high index. Its output current can be determined by the number of LEDs connected in series. But in most cases, its output current should not be too large and the output voltage should not be too high. For example, 264 low-power LEDs are connected in 22 series, 12 series in parallel, each string is 20mA, a total of 240mA. The volume can also be made very small, usually made into a strip shape, so that it can be placed in the T10 or T8 tube. If the current per string is 30mA, 12 is 360mA. It can't be realized in some non-isolated power supplies. In order to keep the total current 240mA, it can only be changed into 8 series parallel. But if the total number of LEDs does not change, the number of series connections is increased to 33. At this time, the total voltage will increase to 108.9V. But usually the maximum allowable output voltage of this non-isolated constant current source is 80V. Only the original 22 strings can be maintained, so the total number of LEDs can only be 176, even if 30mA, the total lumens may not meet the requirements.

However, this non-isolated power supply has some limitations because the non-isolated power supply introduces the high voltage of the AC power source to the load end, which may cause electric shock. In general, the insulation between the LED and the aluminum heat sink is also insulated by the thin film of the printed circuit board of the aluminum substrate. Although this insulating layer can withstand 2000V high voltage, sometimes the burr of the screw hole will cause so-called creepage, making it difficult to pass CE.