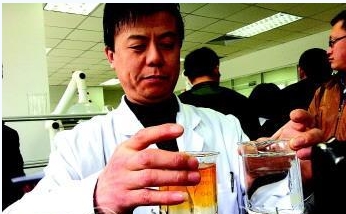 In some mall water purifier sales areas, people can often see the sales staff to do experiments on site, that is, an electrolyzer with iron rods and aluminum rods is put into two identical cups of clear water, after tens of seconds of electrolysis. One cup of water clearly shows the color of rust, while the other glass of water is still clear. At this point, the merchants will explain that the former is ordinary tap water, because the water quality is not good so the electrolysis after the discoloration, while the latter is the water filtered through the water purifier, the water quality is fully up to standard, so there is no problem of discoloration.

â€œThe change of water color by electrolysis does not have any relation with water quality. The reason why tap water changes color after electrolysis is mainly because water contains some electrolytes such as sodium, calcium, magnesium and other metal ions, which make water conductive. When the electrolyzer is inserted into the water, the iron rod of the anode will release iron ions due to the current and combine with other ions to form various iron compounds. These iron compounds are insoluble in water and floccular precipitation occurs.â€ Qingdao Hairun Water Group Propaganda Minister Zhang Rui said that many merchants selling water purifiers on the market are trying to deceive consumers with electrolyzed water tests.

In order to more intuitively prove that the water quality of the mineral water and tap water can also be electrolyzed, flocks of 250 ml of tap water, Evian mineral water, and Wahaha purified water, each of which meets the standard of water quality, are electrolyzed. In seconds, after standing for a short time, yellow water flocs appeared in tap water and Evian mineral water, and the floc of Wahaha pure water was not obvious. "There is no electrolyte originally in purified water, so basically there will be no floc after electrolysis, but if you add a little salt, it will change color after electrolysis," said Wang Xiaofang, director of Qingdao City Water Supply Quality Monitoring Center.

"After boiling, my home, there was some white sediment in the bottom of the pot. Is this because the water quality is not up to the standard?" On the 10th, at the Qingdao City Water Quality Monitoring Center, a citizen asked questions.

â€œNatural water and tap water both contain temporary hardness, that is, water contains calcium and magnesium ions that are soluble in water. They are invisible to the naked eye. When heated and boiled, these ions decompose into water-insoluble calcium carbonate and are insoluble in water. Magnesium hydroxide precipitates in water, which is commonly understood as scale, which is a normal phenomenon and has nothing to do with water quality.â€ Wang Xiaofang said that mineral water contained in tap water is necessary for human body, if there is no drinking for a long time The pure water of minerals is also not conducive to good health.

USB3.0 - also considered SuperSpeed USB - for those with PC or audio / high-frequency device to provide a variety of devices connected to a standard interface. From the keyboard to high-throughput disk drive, a variety of devices can use this low-cost interface for smooth operation of the plug and play connectivity, users basically do not spend too much thought in it. The new USB 3.0 to maintain compatibility with USB 2.0 also provides several enhancements to the following:

Greatly increased bandwidth - up to 5Gbps full duplex (USB2.0 was 480Mpbs duplex) to achieve better power management enables the host to provide more power for the device to achieve USB-rechargeable battery, LED lighting And mini-fan applications. Enable faster identification of the host device the new agreement makes data processing more efficient USB 3.0 storage device can be limited by the rate of transferring large amounts of stored files (such as HD movies).
For example, a use of USB 3.0 flash drive in the 3.3 seconds to transfer 1GB of data to a host, and USB 2.0 requires 33 seconds. Consumer electronics devices by increasing the resolution and storage performance requirements driven by the hope that through a broadband Internet connection to achieve wider media applications, so users need faster transmission performance, to simplify the downloading, storage, and a large number of multimedia Content sharing. USB 3.0 to provide consumers with easy connectivity it needs played a crucial role. When the device when used in consumer, USB 3.0 will address not recognize USB2.0 devices without battery problems. Host to reduce the current through the USB 3.0 slow to recognize these devices, such as mobile phone battery has gone bad.
For the purposes of systems and ASIC developers, USB 3.0 chips and IP to ensure a wide range of practical requirements of each design can be met in a timely manner. The full range of support for standards such as USB 3.0 is particularly important because the speed, advanced protocol and a variety of cable length (from a few inches to several meters) makes the design and standards compliance as a challenge.