The LED strip refers to the assembly of the LED on a strip-shaped FPC (flexible circuit board) or PCB hard board, and its name is named like a tape. Because of its long service life (generally normal life of 8 to 100,000 hours), it is becoming more and more environmentally friendly and has gradually emerged in various decorative industries. Nowadays, more and more people like to use LED light strips. Here is a brief introduction to the easy installation method of LED light strips.

When the LED light strip is used for interior decoration, it is very simple to install because it does not have to withstand wind and rain. Take the LED strips produced by BHP as an example. Each LED strip has a self-adhesive 3M double-sided adhesive on the back. When installing, you can directly remove the 3M double-sided adhesive surface sticker, and then fix the light strip in need of installation. The place is just fine with your hand. As for some places that need a corner or are long, what should I do? Very simple, the LED strip is a circuit structure consisting of three LEDs in a series-parallel manner. Each of the three LEDs can be cut and used separately.

Outdoor installation is subject to wind and rain. If it is fixed with 3M glue, the 3M adhesive will be reduced for a long time and the LED light strip will fall off. Therefore, the outdoor installation often adopts the method of fixing the card slot, which needs to be cut and connected. The place, the method is the same as the indoor installation, just need to be equipped with waterproof glue to consolidate the waterproof effect of the connection point.

b. Do not reverse the positive and negative poles;

c. The operator should wear an electrostatic ring.

There are a lot of LED strips for customer needs that are not conventional and need to be customized. However, because they are not familiar with some technical parameters of LED strips, there are many requirements that are obvious and do not meet the technical requirements, even if they are used, they will be affected. Here, I would like to talk about the three major considerations for special customization of LED lights for reference by purchasing customers:

1, the circuit design of the LED light strip:

a. The advantage of the series circuit is that the current is constant, and it is easier to control the driving current of the LED. The disadvantage is that if one of the LEDs is damaged, all of the LEDs will not light up, but will not affect the life of the other LEDs.

b. The advantage of the parallel circuit is that any one LED is broken and does not affect the use of other LEDs. The disadvantage is that if no current limiting resistor is added, any LED will be damaged, which will cause the current at both ends of the LED to increase, which will burn out other LEDs. And because the driving voltage of a single LED is very low, most of the voltage will be useless, which is a waste of resources.

c. The series-parallel circuit is a common circuit for LED lamps, because several LEDs are connected in series to form a group, and then connected in parallel with other groups. It can maximize the use of the supply voltage and reduce the useless power loss. At the same time, using several LEDs in series can ensure that the driving current of these LEDs is consistent, which is beneficial to the constant LED current to ensure the service life of the LED. The LEDs in series are connected in parallel with other groups to ensure that if one group is damaged, it will not affect the normal use of other groups. At the same time, since each group has a current limiting resistor, it will not affect the service life of other groups due to damage of one group.

2, LED lights with the number of beads per meter:

Usually, the number of beads per meter of LED light strip is fixed. For example, the 1210 is 60 lights, the 5050 is 30 lights, and the special is 60 lights. If there are other special requirements, such as 50 lights per meter, this involves modifying the circuit. Because it is usually a group of 3 LEDs, if it is 50 lights, it will become a group of insufficient, but if it becomes a group of two LEDs, it will increase the resistance of the current limiting resistor, which will result in waste of resources. . Therefore, when making special requirements for custom LED strips, be sure to pay attention to the number of beads is a multiple of 3, so that it will not waste the voltage resources.

3, the cutting position of the LED light strip:

In general, each group is made a cut position. However, some customers will require a single LED to make a cut position, which is also unreasonable. Because that is equivalent to a parallel circuit, there is no guarantee for the service life of the LED strip.

Plate non-damaged desulfator with Smart pulse,Simple and Safe,Save your money, time and worry.
Most of Electric vehicle use lead-acid battery bank(12V /6V /8V cells packed in Series)as the power source. The design lifespan of battery is 2~3 years, but actually the battery is usually failure after 6~12 months used which State-Of-Capacity gradually decline and even some scraped. Through analysis by cutting a large number of failure batteries, the battery water loss and sulfation is quite prominent. Such as the phenomenon of battery sulfation and dehydration can be effectively inhibited to prolong the service life greatly up to 2 times.
Battery Smart Pulse Charging Restorer is a new generation of high-tech products developed specifically for restoring Electric vehicle battery and UPS power system when it is charging every time, it utilizes the energy from the charger, generating electronic smart pulse with special frequency to be resonance with the thick lead sulfate crystals in battery charging process. Under the disturbance by the specific frequency pulse, the recrystallization of lead sulfate can be prevented effectively.
Battery Charger And Restorer 2-in-1 is a multiple-stage charger with smart pulse maintenance ability. 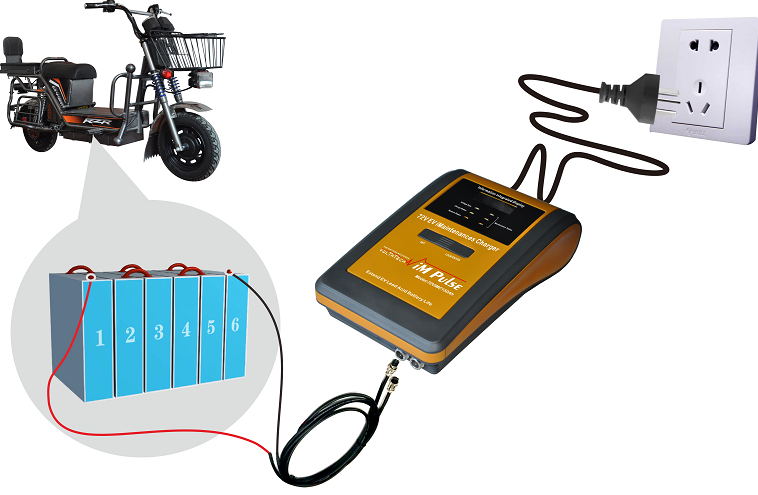 This innovative, state-of-the-art battery restorer smartly knows how to restore battery in charging process, Unlike other common chargers on the market, you don't need to select the battery type. It works smartly on any type of 12/24/36/48/60/72-Volt lead-acid battery â€“ VRLA, AGM and flooded. Proprietary algorithms combined with microprocessor & IC controlled technology measure the battery's voltage and current to automatically determine and deliver the precise pulse frequency and duty cycle based on the size and condition of the individual battery.
It is more than a common pulse charger and desulfator.  During the restorative battery charging cycle, VoltaTech's patented, optimized frequency pulsing and smartly changeable duty cycle constantly work to minimize and reduce battery sulfation and internal resistance.  By reducing the size and number of lead sulfate deposits on the battery plates- the No.1 cause of battery failures, increase capacity and release energy to keep battery in new conditions, your battery will charge deeper, maintain greater reserve capacity and last longer service lifespanâ€“ up to 2 times longer.